I got there plenty early and hoped to meet some players wandering around. I managed to meet Pace Manion, thought I’ve met him before on the golf course. I introduced him to my 3 kids and he was very nice. The kids commented on how tall he was and I explained that he was a “medium” height guy for Bball. I still remember that game when Pace went down hard and hit his head. I swear he never played as well after that head injury.

At the ceremony I was nearly in tears for all the greats I’ve watched for the 35+ years I’ve been going to the games, since I was a kid. I naturally cheered the loudest for my favorite all time player Danny Vranes and I almost lost it when they announced Alex Jensen.

Though Alex Jensen never had the most talent on the court, he had more heart than any player I’ve ever seen. That guy played with more drive, desire, heart than anyone and he played hurt. Remember when his face was literally bashed in and he came back after half time and tore it up? Man what a stud.

I went down to do my regular sit in drum gig with the pep band at the 8 minute time out in the 2nd half. The drummer today was so casual he let me play the rest of the game. So I got to watch the exciting 2nd half from the best seat in the house, the drum kit on the front row. What a great time.

We get to the basketball game and something sounded strange with the Ute band. No drummer. After they played a couple of tunes which didn’t sound too great, I walked over and introduced myself to the band director Eric Peterson. I asked “do you need a drummer?” And he said “do you know how to play?” I told him I’d been playing for over 35 years and he said “oh you can REALLY PLAY? Go for it.”

So I played the rest of the night with the band. Pardon me tooting my own horn (pun intended), but I kicked ass and didn’t miss a note. It helps to be a fan who has heard the songs since I was a little kid.

After the first tune the band members all cheered and yelled out “get him a scholarship!” They’re going to send me a pep band shirt and make me an honorary member and they asked if I’d drop in and play a tune at each game! I said sure! So watch for me at the games on the drum kit!

I thought my normal seats on the 16th row were fine, but watching the game from 5 feet behind the basket was great. I could even hear Neville inhale when he made a big two handed slam. The view of the cheerleaders wasn’t too shabby either… 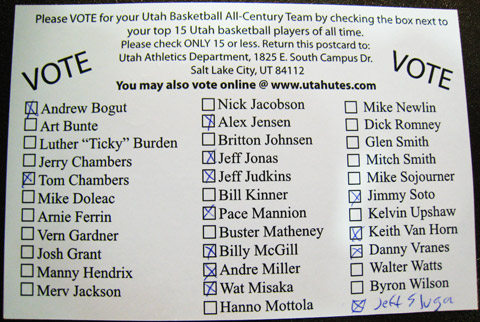 I attended the first basketball pre-season game. I must say the team looks more crisp and tight than a Giac team would look mid-season. This is good.